We Americans love our guns. Love ‘em. We don’t just feel they’re a Right, a necessity, a possibly delusional buffer from harm; we’re freakin’ PASSIONATE about the things. We kick and scream in protest for them, demand the freedom to buy as many as we can, resist all attempts to regulate them; hell, we’d marry them if we could but that would trigger (no pun intended) the anti-gun-marrying lobby and that’s a whole other argument.

Why the love affair? Odd, when it seems to me that Gun Love has proven to be as high-maintenance, wildly erratic and inevitably dangerous as that hysterical, possibly bipolar chick who’s hot and feels absolutely essential to life but ends up trashing the living room and leaving hateful messages on your boss’s voice mail. But still we’re in love. Why? Why is a cold hunk of metal with the kick of a cannon and the ability to blow out a target, scare the shit out of a home invader, or rip through the brain of an unsuspecting congresswoman so firmly and irrevocably ensconced as the object of our affection?

But I suspect it’s history. Guns are part of the American DNA. They won us the Revolution, propelled Manifest Destiny, got us through a whole bunch of wars, Indian uprisings, the Gold Rush, Prohibition and kept us in meat products. We needed guns, they were essential to our very survival for the bulk of this country’s history and in certain quarters (law enforcement, hunters, collectors, Olympians) they remain relevant even now. But beyond those select groups, what have they done for us lately?

Gun Lovers would holler, “Gun ownership is up and crime is down!” OK. That statistic has merit at first glance, but get out a magnifying glass and look at this chart posted by the US Department of Justice : 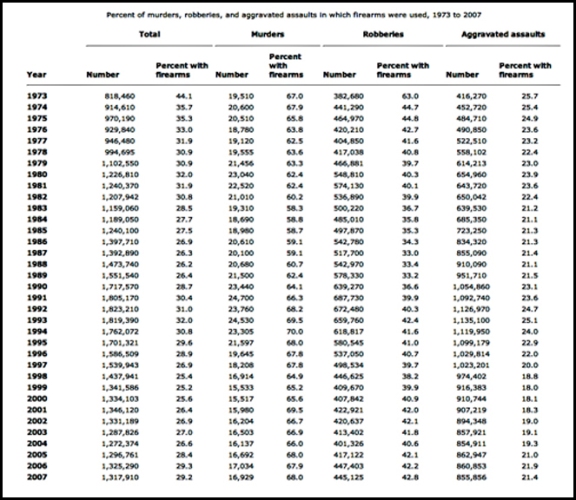 Yes, the trend for 2007 improved from the previous year. But look at the earlier years…lots of trending down then up again. And even if we do consider a temporary decrease in gun-related crime, analysis suggests that one must consider much more than gun ownership as the cause. More effective community policing, aging of the population, better gang intervention, more active neighborhood watch programs, metal detectors in schools and public buildings; all of these factors contribute to those shifting numbers. But whatever the trend, in the last year of reporting some 16,929 people were murdered, 68% by guns, and that’s daunting however you slant it.

The National Safety Council “investigated the likelihood of dying from firearms and determined that over the course of a lifetime, death by assault from firearms is 1 in 309.” And just recently it was reported on national news that shooting deaths of law enforcement officers are already up from this same time last year. If law enforcement officers, certainly better armed than the average citizen, can be so frequently victimized by guns, really, who can argue that possession is an effective deterrent?

Gun Lovers can. Lulled by the placebo effect of their trusty loaded companions, they’ll argue it till the day is done. But it’s interesting, the Tucson shooter wasn’t deterred by a Gun Lover packing protective heat. In fact, he was taken down by heroic, unarmed bystanders. In a concealed carry state. Which piques its own debate. But putting that aside, all of this leaves the rest of us to ponder: if gun possession offers such assurance of safety and protection, why are so many people being killed by them?

Though nobody knows exactly how many guns there are in the United States (as GunsandCrime.orgput it, “The only way to know with accuracy would be for the government to perform a surprise raid on every household simultaneously and to also search all buildings and likely hiding places at the same time.”), the American Firearms Institute (a pro-gun organization) estimates that “there are between 250 – 280 million firearms in the US; 40 – 50% of US homes own a firearm, that’s 120 – 150 million people.” According to the latest figures from the US Census Bureau, there are 311,947,145 people in the United States. Take the number of firearms and spread them out amongst that population and about 90% of people would own a gun. The 50% figure indicates that some households own multiple guns and others own none, but either way, those figures speak volumes. And, of course, this isn’t factoring in the criminal element…God knows what that accounting would do to those numbers!

In the spirit of full disclosure – and to prove my general firearm possession cred – my husband has a small collection of rifles and shotguns; all but one are family heirlooms, my son has .22 caliber rifle he used years ago to shoot soup cans in the woods of the Pacific Northwest, and I once owned a hearty .357 Magnum, a rather startling gift bestowed on my 20th birthday by a boyfriend who was obsessed with guns in general. He wanted me to have it as a companion piece to his .44 Magnum with the 8 3/8” barrel (yes, just like Dirty Harry) and insisted that we celebrate my big day by going to a makeshift shooting range to decimate a boatload of coffee cans (Red Lobster and cake would have been preferred). When I inevitably left him sometime after I discovered he was crazy and well-armed, he took the gun back, chased me down the street with his truck and a loaded rifle, and later became an Illinois policeman. My personal relationship with guns ended with him and I remain to this day unenthralled.

But don’t get me wrong, I’m not advocating that people not be allowed to have guns. Frankly, I don’t care. Have as many as you can lay your hands on; stash them in your bunkers, your kitchens; your cool, hip-hugging, open carry gun belts. Talk about them a lot on the Internet, sleep better at night convinced that you’re safer, rally vociferously at gun shows dressed in camouflage while spouting bromides about the 2nd Amendment and what pussies Brady Bill proponents are. Take your kids to shooting ranges for jolly good family fun and teach them to love the power of guns while listening to “Cat Scratch Fever.” Get pissed off whenever anyone attempts to reason with you about regulation or limitation. Be in love. We get it: YOU NEED YOUR GUNS. YOU NEED YOUR AK47, YOUR 9MM PISTOL, YOUR THOMPSON CENTER ARMS ENCORE MUZZLELOADING RIFLE AND YOU DON’T WANT ANYONE – NOT BLOODY ANYONE – TELLING YOU TO WAIT FOR A PERMIT, LIMIT THE NUMBER OF BULLETS OR GET A BACKGROUND CHECK BEFORE YOU PICK UP THAT OBJECT OF YOUR OBSESSION.

Relax. We get it.

What you need to get? That there are a whole lot of us out here far less concerned about your love affair than the hideous numbers of murders, assaults, rapes, spousal abuse events and other violent gun crimes perpetrated by crazy, pissed off people who love guns as much as you do. Go ahead, say it: guns don’t kill; people do…blah, blah, blah. But tell me, how many people do you think the Tucson shooter would have killed or injured with just a knife? How many kids and teachers would the Columbine killers have mowed down if they’d been relegated to machetes or baseball bats? Any guess how much less effective a murderer on top of tower, aiming into a crowd or focused on someone in the distance would be were he not deftly assisted by the mechanics and firepower of a gun? Logic, my friends, logic is required.

But, you opine, it isn’t fair to oppress and restrict the Good Gun Lovers because of what the bad ones have done. I know, grow up, that’s the Way of the World. Bad Guys always ruin it for Good Guys in every walk of life. Ever get involved with someone previously shattered by a cheating cad? That’s right, you’re going to pay for the sins of that last errant Lothario. Dog owners? I can’t take my dog to the beach because the ill-trained ones of Bad Dog Owners bit people, tumbled kids and pooped on the dunes and because of them, my Good Dog must worship the surf from afar. Bad Guys hijacked and blew up planes so now all we Good Guys have to suffer through every manner of delay, humiliation and loss of our shampoo bottles just to get to our seats. Way of the World.

But here’s the cold, hard truth, whether you Gun Lovers want to hear it or not: there are too many guns in this country and too many crazy people using them. Regardless of what the framers had in mind when they penned the 2nd Amendment, they could not possibly have envisioned the world in which we now live or the obsessive, compulsive, testosterone-driven madness that has been perpetrated by the rabid misinterpretation of their intent. The ass-kissing that is politically de rigueur with the NRA and the pro-gun lobby is appalling and shameful because no one – NO ONE – should be unwilling to honestly and clinically look at the destruction caused by guns and readily come to the table to discuss effective solutions towards solving gun violence. If I were a Gun Lover I’d demand those solutions so that my right to own a gun would not be any more impacted by the actions of crazy people than it already is. Fear, ego, machismo, xenophobia, fundamentalism, paranoia, conspiracy theorism and downright ignorance have ruled the day when it comes to gun control. Like a toddler who most passionately possesses a toy when he fears someone’s going to take it away, I suspect a similar thread of selfishness and paranoia propels much of this lunacy. GET OVER IT! Your need to own and possess is as petty as a nit compared to the human, decent urge to prevent tragedy and truly attempt to make the world a safer place, not just in your gun-protected home but in the schools, businesses, airports, post offices and streets of this country. No one wants to pry the gun from your hands – cold, dead or otherwise; we simply want rational, sensible, and effective regulations to be uniformly enforced so that fewer children die in the parking lots of our neighborhood grocery stores.

For any of us, Gun Lovers and Others, that should not be too much to ask.