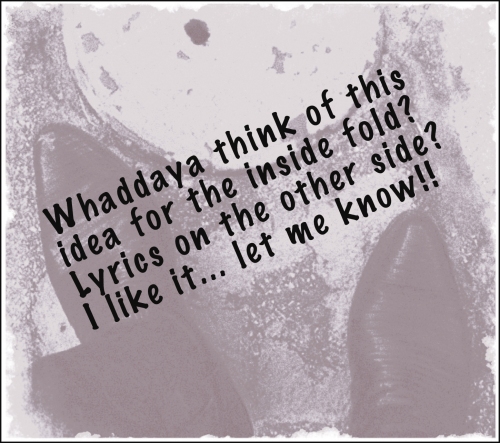 I spent a weekend in Chicago recently with a group of old friends celebrating a birthday. This particular group embraces people from every era of my life – grade school, high school, college, and beyond – and every single one of them is supremely talented in one creative arena or several. Particularly music. Which meant the weekend, like all weekends with this group, was filled with music: the singing, playing and, this particular weekend, the writing of it.

Writing songs used to be a major part of my life. I wrote my first real song back in the 80s, a very era-centric pop ditty called “The Ghost,“ which I co-wrote with the drummer and guitarist of my band, Tony Alexander and David Resnik, respectively. It had a boppy sing-along chorus and a great synth part and the words worked with the rhythm. That song, for some odd reason, became a popular tune in France and was one of the band’s top requested numbers at live gigs. And I was singing my words… I was hooked.

The process of songwriting was mentored for me by both players but mostly Tony, who, though a complex fellow I didn’t always understand, was a deeply creative musician who organically understood the flow, rhythm and meter of music. He taught me to listen to what the music communicated and trust what it told me. He taught me to trust my own skills as well, and gave me plenty of opportunities to practice them. I became a good songwriter, predominately a lyricist at that point, and we – Tony, David and I – wrote some great songs together. One of my favorites, one that also, strangely, made it to France, garnered us the attention of 80’s icon, Kim Fowley, who thought we “smelled like money,” as well as thought we had an 80s hit in “What Can I Do?” While the song never fully blossomed into the commercial boon we hoped, it was one that remained emblematic of the mood and musical sensibilities of the era and our part in it. One of my dearest friends, Tina, knows she was the inspiration for the lyrics and to this day presumes most of my lyrics are about her. 🙂

I eventually began writing melodies as well as lyrics, a process that relied on my ability to grab the “music in my head,” since my hands never learned to play an instrument well enough to properly assist me in the task. I’d listen to a recorded track over and over, locked in my “songwriting bubble” of focused, meditative concentration, and eventually the melody (and the words) would come to me. Sort of magical, always very exciting. As I was sorting out these various songwriting methods that worked for me, I discovered that the process is as personal and individual as any craft and, as my own confidence rose, I listened and learned where I could, but also came to understand that no one else’s process need be my own. When I’d read articles about that great writer who “wrote 5 songs a day” and all I could manage were one or two a week, I didn’t let it bother me. When friends from Nashville told me everyone there sits in a room together and hashes out lyrics line by line, it wasn’t hard for me to say I worked alone inside that “bubble” to find the story of a song. When others said you should do this or that or the other… well, I followed my own drummer and became my own songwriter. We each have our way.

My second prolific songwriting period was what I called “the English chapter.” A couple of longtime Rod Stewart vets, the inimitable Jim Cregan and Kevin Savigar, were looking to put their own side project together, looking for a singer/lyricist specifically, and mutual contacts “made the marriage.” We worked together under the moniker Third Person (ironic that in the only band photo we took, Jim couldn’t be there so our “third person” was a mannequin!) and together, as well as with other writers the guys knew, we created a catalogue of songs that are still some of my favorites.

It was with “Tender Mercy” that I stepped up in this particular incarnation to first contribute melody parts. Both Jim and Kevin welcomed my contributions (and were very fun guys!), so writing with them, as well as with the other writers they brought along, was always fabulous. Lots of laughing and wine. Our process was, typically, that they’d give me already recorded music tracks with some melody ideas hummed over them, and I’d come up with the words. As we continued, tracks started to come without melodies so I could find my own, and, eventually, we started songs from scratch, sitting around Kevin’s music room or Jim’s Sunset Strip vintage condo bashing out songs we’d later record in some stellar Hollywood studio. Notable was the opportunity I had to provide Rod Stewart, at his request, with lyrics for the song that would ultimately become “Forever Young.” He didn’t use my words, but just the asking was a heady experience at that stage of my career!

After that chapter came a few years of writing and recording songs for films (my favorite being one I wrote with my old guitarist, David Resnik, for the independent film, To Cross the Rubicon, a tune called “I Surrender”). But the next big foray had to be my most profound and satisfying as a songwriter. I’d always wanted to write and record my own album; it was, in fact, a life-long dream. But as the music business undulated in the changing, churning tides of the digital and internet revolution of the 90s and into the 2000s, things changed. When piracy and downloading shattered all previously known paradigms, leaving the bar for “rock star success” so high and down so long and winding a road that few know how to follow, it became, for me, simply about the music.

In the early 2000s I started working with a deeply talented guitarist and songwriter, Rick M. Hirsch, doing a blues/rock gig, which was incredibly fun but largely built on classics rather than originals. Two years in, it finally felt time to create our own music and so we did. The first song we wrote together was built on a guitar riff Rick had in his personal library, one so evocative and emotional that I was immediately drawn to the melody and words of “Drowning.” Songwriters are often asked what compelled certain lyrics, if they’re fact or fiction, and this one was definitely inspired by an outside source. Mira Nair had directed an emotionally wrenching film called Hysterical Blindness about a floundering young woman struggling with the fallout of her father’s abandonment and her own inability to find meaningful love, and the ache of that script jumped out at me; “Drowning” ended up being an homage to that very heartbreaking story.

Another of my favorites from our collection was hatched in its melodic and lyrical entirety in the “songwriting bubble” inside my head, assisted by no music track or chord progression. It was just a musical line that ran over and over in my mind, its melody slowly attaching, with lyrics to follow. I sang it into a boom-box recorder (yes, that’s what we used back in those days!), gave Rick the cassette, and he came up with the chords and arrangement that not only supported it, but built on the words and melody. The song, “Richer For Rain“ became an anthem of sorts, a testimonial to the triumph of realizing that one’s hurts and heartaches only add to the richness of who we ultimately become. It also became the title track of Rick’s and my CD of 11 original songs which, later, after the incarnation of our project took some turns, I released as a single artist under the new title, Somewhere On The Way (a refrain from “Richer For Rain”). That CD, a true labor of love and one I will remain forever proud of, is up at CDBaby and iTunes, if you’re interested.

While I continued to dabble in the craft even after that album was done and out in the world, as anyone reading this likely knows, my creative focus shifted more predominantly to other writing arenas: fiction, non-fiction, journalistic, etc. But the music Muse was always there, always tickling my brain with snippets of melodies and lines of verse that begged be formed into something cohesive and melodic. But circumstances to collaborate were fewer and farther between and so I suggested the Muse sit down for a bit, relax, and wait until some new turn of events offered an invitation. That came with this glorious gathering of friends.

One in particular, Jason Brett, is a brilliant and accomplished producer (About Last Night), entrepreneur (founder and CEO of MashPlant.com, an emerging artistic and educational platform for school/student interaction), and all-around creative enthusiast, who also happens to think I’m one of the funniest people on earth (the

feeling is mutual so you can imagine the time we spend falling to the floor in laughter, particularly if certain mutual friends – Pam and Louie, that’s you! – are there to egg us on!), and while I was visiting recently, he pulled out his guitar and we sat quietly for about 30 minutes banging through a chord progression he came up with, recording it on our iPhones to listen to later.

Later was back home in Los Angeles; I ran it over and over, inviting my Muse to sit with me and see if there was something to hear and translate from the music. We listened, again and then again, and there it was… slowly emerging from the tinny, muddled recording on my phone. First a melody idea, than a lyric or two; before long the whole song flowed out of that progression and I rushed to type up the story that was being told. I went back to Chicago a couple of weeks ago and we sat around Jason’s music room to work out the bridge, find the right key, come up with the feel and flow of the arrangement and, before I hopped back on the plane, we had our song. It’s ready to be recorded, but we’ve decided to accrue a few more before we go into a studio to experience something both long-distant and oh-so-familiar to me, as well as one of the most exhilarating experiences any singer/songwriter can possibly have: going into a good studio with excellent musicians and top-knotch technicians to record a song you wrote. Nothing much better than that in the spectrum of creative experiences.

I’m writing about this today because it reminded me of how powerful and energizing the creative process can be – whatever creative process – and how life can prove so circular and unpredictable. How things that once seemed to have disappeared can come back anew; how something we long ago abandoned or felt we had to put aside can suddenly move right into the forefront to bring us back to some part of ourselves we loved… and missed. My Muse is delighted to be back in the room. I’m delighted to have her there.