“The Geeze & Me” is a funny, irreverent, and poignant original musical. This timely show features a comedic troupe of eccentric players who team up to wrangle aspects of aging from an expert. An eclectic blend of songs ranging from pop to blues to corner street doo-wop, accompanied by innovative choreography. The perils and benefits of growing older are reflected in the concerns of this diverse group of people.

YEP. That’s me… one of those “eccentric players.” Back on the boards again after a decade or so off; singing, acting, dancing like the theater maven I used to be, inspiring the question: “Is it like getting back on the bike?”

It is. And isn’t. It’s better than that. It’s like getting back on the bike and discovering the bike became more precious in the interim.

I was always a dramatic child. From the moment my mouth opened and started expressing itself, my mother called me “Sarah Bernhardt,” her passive-aggressive way of telling me I was pushing the limits of emotive enthusiasm.

But when you’re one of eleven children, and every one of those is loud and unfettered, you have no choice but to be assertive getting your points across. And I was assertive, whether doing basement plays, church folk songs, college theater majoring, or kicking ass as a rock & roller.

There’s just something about singing and acting that’s always been exhilarating to me. I know you other performers know exactly what I mean. That sense of channeling thought and feeling through your limbs and legs and vocal cords in ways that are physical and purging and yet can still convey fragility or love or anger. I remember moments of feeling so high (and with no enhancements involved) just standing in front of band or orchestra, singing my lungs out with soul-cleansing abandon. It’s a stunningly visceral experience and when I stopped doing it a while back, for reasons to do with lack of opportunity or heightened selectivity, it felt as if I had to adjust my breathing just to get enough air. Strange how that works.

Writing has been a lifetime Muse as well, as many of you are aware… a joyful one, a deeply satisfying one, but one of quieter comportment. More solitary and less collaborative. And I missed that collaboration, that madness particular to creating within a group. So as I’ve joyfully written, I’ve kept an eye out for opportunities. And one finally came my way… in the form of The Geeze and Me.

My pal, Nancy Locke Capers, my very first girlfriend made when I moved to Los Angeles as a toddler (okay… a young-twenty), has been living in La Jolla (near San Diego) for decades now, and, unbeknownst to me, was years into creating a musical with her very musical husband, Hedges Capers. Hedges, whose pedigree as a singer/songwriter is long and impressive (you can catch up with both their careers by clicking HERE and HERE), had an astonishing repertoire of songs—witty, clever, soulful, kickass, heartfelt songs—that literally oozed with narrative, and with those bones, he and Nancy created a witty, clever, soulful, kickass, heartfelt show analyzing, defining, debunking, and celebrating the “vicissitudes of aging.” They titled it, The Geeze and Me. 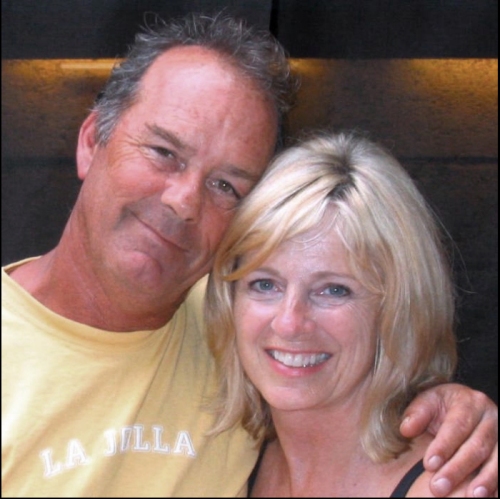 We were sitting together at a friend’s wedding when I first heard about the show. Over, I believe, arugula salad with rosemary croutons, they asked if I’d be interested in getting involved. Interested? I felt old muscles perk up, dusty lights blink on; vocal cords vibrate with hopeful anticipation. Involved? OF COURSE! But it was reading the script, and, particularly, hearing Hedge’s songs, 20+ songs, that sealed the deal. The singer in me was tantalized, the storyteller impressed; the emoter wanted nothing more than to get out on whatever stage these two put together to sing those songs. I was in.

Now, Nancy and I have done many a production together, from collaborating on a feature screenplay (which was quite good, mind you), to working within the theater company at The Alliance Repertory in Burbank, to the premiere of an odd and hilarious play called Buried Together at Theater at the Improv in Hollywood (which Nancy directed). So our history as collaborators is long and storied. I trust her sensibilities, both artistically and personally, and know how great she is to work with. I also knew her years as a therapist would imbue her writing and directorial vision with deep understanding and wisdom. In fact, I love what she personally had to say on that topic:

As a writer, I was hoping to bring energy to the musical landscape with something fresh and new: a story with a post-modern structure, exploring the territory of intimate relationships as we age, personal loss, and the crossroads of adaptation and holding on. We plumb the ground of friendship, illness, sexuality, loneliness, personal dreams and anxieties. Oh…and make it funny!

I’ve tried to balance reality with a surreal quality of personal transformation, which I’ve witnessed during my many years as a psychotherapist. Working with a dream cast and the many collaborators who bring abundant creativity to the table is a thrill.

As for Hedges… well, he’s all heart and soul: on his sleeve, in his words, woven throughout his music. A consummate artist, he’s put everything he’s got into this production, from creating the projections, to supervising set builds, to collaborating on the script, to designing the production, but, damn… it’s those songs! He seems to have a well of inspiration unlimited both in depth and breadth, the show’s repertoire evidence of that astonishing creative spectrum. Being able to perform songs that are everything from absurd, to funny, to provocative, to rip-your-heart-out tender is a gift for any performer. So I feel gifted to be there, to be working with them, with the incredible staff they’ve assembled, and certainly the amazing cast of actors and singers who impress and delight me daily.

Of course, I’d love for all of you to find a way to San Diego during the run: March 31st—April 29th. You can check the website for details, get connected to the show’s Facebook or Twitter pages for updates, and certainly you can contact me. Believe it or not, there are several nights that are already sold out, so if you’re planning to get there (and San Diego is a great place for a weekend field trip!):

So there you go… that’s my latest. Getting on with the act of creating during this strange and trying time in our country, and so grateful for the opportunity. Thanks for catching up, rehearsal’s in an hour; gotta go warm up the cords (damn, this is louder than writing books! 🙂 )

FOR Media and Press:

NOTE: My third novel, The Alchemy of Noise, pubbed earlier this year and is continuing to enjoy its rollout, with enthusiastic reviews and a brand new Gold Medal in Literary Fiction from the “Readers’ Favorite International Book Awards.” For details, reviews, podcasts—and to purchase your own copy—click HERE.