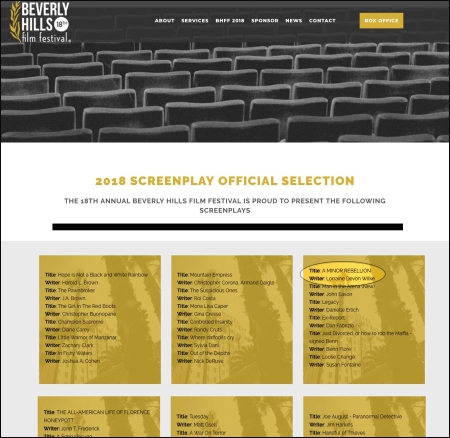 Look at the gold box in the top-right corner of the screenshot above. Note the text highlighted by the amber oval… go ahead; I’ll wait until you enlarge the image enough to read those impossibly tiny words.

This, to the uninitiated, is the official announcement alerting the public that my screenplay has been designated a “2108 SCREENPLAY OFFICIAL SELECTION” for the 18th Annual Beverly Hills Film Festival.

Though, frankly, I have no idea what that actually means or what might ultimately come of such an assignation. None. But, hey, in a world and business where far too little of one’s work ever gets anywhere, much less “selected” for the film festival of one of the most prestigious cities in the world, one doesn’t shake a damn stick at that sorta thing!

Unless plans change, I won’t be attending the resplendent Awards Ceremony at the Sofitel Hotel, so there’s no need to drag out my tiara or bemoan the fact that I look hideous in those fluffy red carpet type sleeveless gowns. There are a slew of interesting events and gatherings to which we’re given carte blanche, most scheduled at the iconic Hollywood landmarks of the Roosevelt Hotel and Grauman’s Chinese Theater, so that’s some fun stuff right there.

I get a big fancy badge, a free pass to everything besides the banquet, so I’ll see some movies, maybe sit in on a session or two (if you’re around Hollywood April 4th-8th and feel like festivalling it up with me, give me a holler!). But, to be honest, I don’t know what the Festival does with all these “selected screenplays,” or what might actually come of this honor. I don’t know if they have a cadre of skilled readers currently slamming through that hefty stack with an eye toward story arc and character development, focused on choosing whichever 120-page manifesto merits acknowledgement beyond “selection,” but whatever the protocol, it almost doesn’t matter.

Because, let’s face it: the reality of winning whatever it is someone might win in this vaunted scenario is miniscule, but still… how nice is it to submit your screenplay amongst thousands and actually have someone decide they like it enough to select it as a “selection”? That’s nice. It really is. So I’m thrilled.

For those wondering what the screenplay’s about, let me give you a short logline:

A former 80s rock singer is thrown back into her mysterious past when her boomeranging daughter secretly – and successfully – posts her old band’s music on the Internet.

Yep.. right there in my wheelhouse. 🙂

As you’d expect, it involves lots of music, 80s and otherwise; there’s a love story or two; it’s a good mix of humor and poignance, and the collection of characters involved would be a treat to see onscreen. So I hope the project garners some attention out of this honor; I hope it ultimately gets developed into a brilliant film, but I will be adapting it as my next novel either way, so no matter what happens, it has a life beyond this.

For now, I’m reveling in the fact that I can say “Beverly Hills Film Festival” and have it connect in some way to something I wrote. That does not happen every day.