My mom’s a party girl. Still. Was in her 20s, still is at 82. If there’s a hoedown going down at the home where she’s a current resident, she’s got the paper hat on, the Kool-Aid in hand, chair-dancing like the jitter-bugger she is…was. It’s in her blood. Irish Catholic chick raised by an extended family of Shaughnessys on the north side of Chicago; a large rowdy brood with a bevy of red-faced uncles who supposedly kept a keg in the living room and never missed a chance to slug one back in honor of today’s saint or tomorrow’s holiday.

With that legacy as background, my mother never failed to turn even the slightest of holidays into a mad-capped celebration complete with colored streamers, construction paper decorations, and party foods forbidden on most any other day. We even made note of Chisholm Trail Day on October 23rd and I doubt if there are many other families who took to partying quite that hearty!

But given her Irish blood (which was, in fact, mixed with the German ancestry of her father, a widow who lost favor upon abandoning his children early on), you can only imagine the household hullabaloo surrounding St. Patrick’s Day. Wearing green wasn’t just suggested, it was mandatory. My mother took great offense, in fact, if you didn’t give this tradition your sartorial consideration…a point of great contention as we hit our teenage years and the requisite eye-rolling that followed such requirements!

But, certainly when we were young, the revelry of the day was met with great enthusiasm, both at our Catholic school with its many Irish nuns and deep devotion to a saint who actually managed to wrangle his own holiday, and later at home, where the party was on before school was even done. Much was made of both the secular and sacred aspects of the celebration, and even the dreaded evening dinner of corned beef and cabbage was endured in exchange for green sweets, green drinks, and a very jolly mother in green who set the tone and the party in motion. She was glorious at those times and those times are good and happy memories. 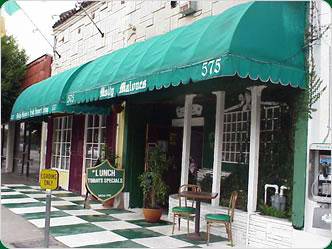 As I got farther away from my Catholic roots and less concerned with what it is one celebrates on any given saint’s day much less St. Patrick’s, it was curious to me how attached to both the legend and the holiday most Americans are. Once it became less a delightful family event and more a co-opted excuse to party like it was 1903 (the year Saint Patrick’s Day became an official public holiday in Ireland), I found myself almost a contrarian. The “everybody’s Irish!” exaltation and the requisite pinching of those who dared eschew green became as eye-rolling to my young adult self as they’d been in high school. Imagine the irony, then, when I got a job in my late 20’s working at one of the premiere Irish pubs in Los Angeles, Molly Malone’s, where the celebration of St. Patrick’s Day was both long and legendary.

That one day of my work year was more exhausting than the rest combined and always much more fun for my customers than for me but, always, at some point in the day, the ringing of sweet childhood memories would kick in and I’d find a moment to revel – if from a healthy and unsoddened distance – in my participatory and bona fide Irishness.

When my own son began his yearly celebrations via the teachers at school who enjoyed any reason to step out of the ordinary day, I once again couldn’t help but be reminded of my mother, who always seemed most alive when she was transforming our house into party town, exuding the sparkling, cheerful woman we most adored. As I see her now in her silly green hat and watch her enjoy the decorations that are not much better than the ones we made all those many years ago, I’m delighted to knows she’s in a place that holds this Irish Catholic tradition dear…because she still is that Irish party girl!

And I am still her child who is grateful she taught me how much fun it is to celebrate simply but with verve. I plan to do so today, with a quiet dinner and a satisfying few hours with a movie I’ve been wanting to see. She’ll likely be dancing in her chair to some frolicking Irish ditty. We’re both going to have a good time. Hope you do too.

Lorraine’s third novel, The Alchemy of Noise,  is currently available at Amazon and elsewhere.