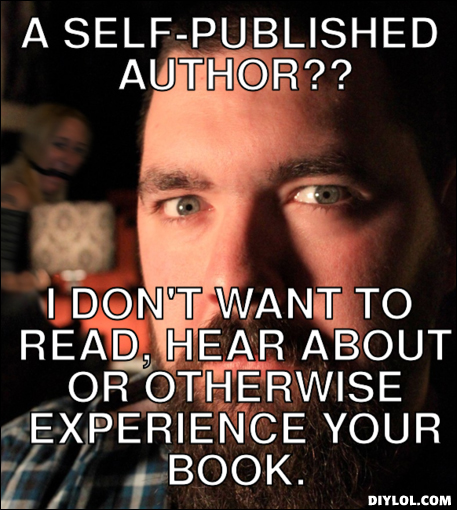 The cheers of indie authors who’ve FINALLY found outlets for their books — whether Amazon, Smashwords, Lulu, indie bookstores; wherever — can be heard far and wide from every corner of the globe. It’s been loudly exclaimed by everyone in the know that it’s the dawn of a new day for writers everywhere. After years of dismissal and disrespect from traditional publishers and their gatekeepers across every element of the literary landscape — from query letter browbeating, ice-cold rejections, overly possessive editors, and blasé publishers with no marketing budgets — independent authors have now taken control of their destinies and ventured forth, filters, limitations and grumpy gatekeepers be damned.

Yes, in some ways. In others, we indies are still very much the ugly stepsisters to our more vaunted and valued legacy colleagues. Don’t think so? Just today I clicked on the website of a “recommended book blogger” (whose name I will leave out for the sake of decorum) who seemed hell-bent on insulting those self-published writers who’d had the audacity to contact him for reviews. His FAQ page not only went out of its way to discuss how unreadable he found most self-pubbed books, but his hissing condescension about “amateurish” writers incapable of even understanding the word “no” led to a sneering pronouncement that he didn’t want to read, hear about, or otherwise experience the books of said authors and, therefore, please don’t waste his time by contacting him.

Sheesh. The fumes of disdain emanating from his page practically choked me.

And he’s not the only one. Media sources abound with snitty-toned announcements that they DO NOT TAKE SUBMISSIONS FROM SELF-PUBLISHED AUTHORS (caps are theirs). Review sites that cover legacy authors free-of-charge gouge self-pubbers in the hundreds of dollars. Feature writers who ooze admiration for the latest debut novelist from the Big 5 have actually figured out how to roll their eyes on Twitter over the pathetic shenanigans of indie writers trying to get their attention.

We’re definitely the “not cool” kids on the playground and this persistent — and, in many cases, undeserved — marginalization makes launching an indie book all the more difficult. When the overriding presumption is that your book is — to put it bluntly — a piece of shit (a presumption with which I personally take umbrage), you’re not only starting from zero in the world of marketing and promotion, you’re climbing from less-than-zero.

Fair? No. But let’s face it; we kinda dug our own hole, we self-published writers. Despite the fact that the industry is changing and evolving on a daily basis, with increasing numbers of options and outlets available, and more and more authors — even some from the traditional world — opting to go the self-published route, the rickety stage set early-on was built largely by anxious amateurs eager to define themselves as “authors” before availing themselves of the various elements of true professionalism. There are still far too many self-pubbed books that are amateurishly written, with poorly edited copy and covers that fairly scream “I’m a self-published writer!!!” And, unfortunately, still too many authors who relegate those necessary tasks as negotiable rather than essential — a professional blunder akin to a restaurateur opening a bistro without a qualified chef, a decent waitstaff, or a well-designed room. The resulting customer and industry response (see above) is the sad and subsequent remnant of that miscalculation.

We are all, every one of us, tarnished to some extent by the mistakes of the early (and prevailing) corner-cutters, but those mistakes are, hopefully, being mitigated by the growing number of independent authors who do approach their work, their books, and their presentation with impeccable and unassailable standards. And that growing number (of which I count myself) deserve to NOT be automatically generalized into a category of “subpar” by media, reviewers, bloggers and the like. Just as many traditionally published books (to once again put it bluntly) suck, yes… so do many self-published books. Conversely, just as many traditionally published books are profound and not-to-be-missed works of literary wonder, so, too, are many self-published books.

That the aforementioned blogger and his snarky cohorts refuse to consider that is evidence of literary shortsightedness. Like geezers who discount useful technology as “newfangled” or antiquarians who bemoan penmanship while ignoring heartfelt emails, they’re missing out. Of a gem. A “stunning debut.” A “keenly executed character study.” A really good book.

Their loss. But the unwillingness of the wider media to explore indie authors with the same open-mindedness — and vetting and reviewing protocols — implemented for those traditionally published, is creating a literary ghettoization. And the resulting deficit is felt not only by the writers being dismissed simply by virtue of being self-published, but by readers who have less access to those authors and their work because of that ignorance.

Just as self-published writers are obligated to evolve and demand of themselves the highest levels of professionalism, so, too, must accompanying media evolve away from their myopia and literary bigotry. If they do not, what is being wasted is far more than their time; also lost is the cultural embrace of much talent and many good books being written by courageously independent authors who deserve at least a look.