Stephanie Moore Hopkins of both indieBRAG (with its coveted B.R.A.G. Medallion) and her own fine book blog, Layered Pages, has done a “Sunday Highlight” of my upcoming novel, Hysterical Love. I’m delighted to have the book featured at her site and invite you to enjoy the piece: 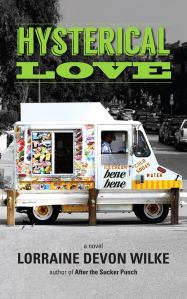 Dan McDowell, a thirty-three-year-old portrait photographer happily set to marry his beloved Jane, is stunned when a slip of the tongue about an “ex-girlfriend overlap” of years earlier throws their pending marriage into doubt and him onto the street. Or at least into the second bedroom of their next-door neighbor, Bob, where Dan is sure it won’t be long. It’s long.

His sister, Lucy, further confuses matters with her “soul mate theory” and its suggestion that Jane might not be his… soul mate, that is. But the tipping point comes when his father is struck ill, sparking a chain of events in which Dan discovers a story written by this man he doesn’t readily understand, but who, it seems, has long harbored an unrequited love from decades earlier.

Incapable of fixing his own romantic dilemma, Dan becomes fixated on finding this woman…