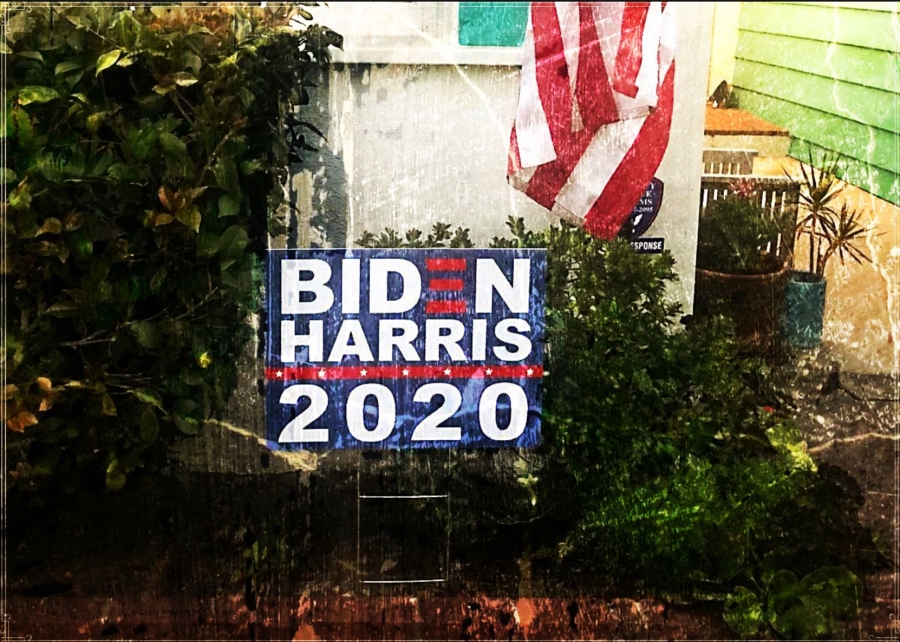 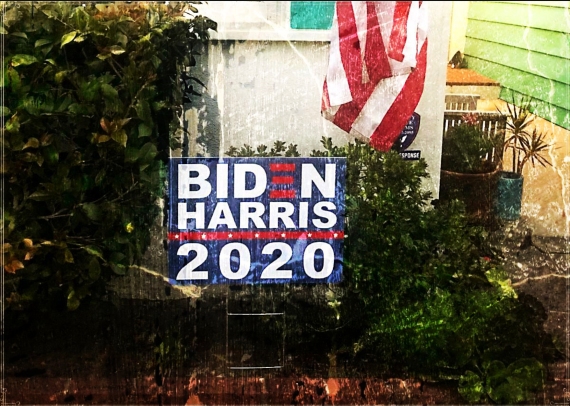 I’d never bought one before.

Not because I’m politically shy. I’ve always been happy to holler about who had my vote or where I stood on issues, was never bothered when people warned I might put off family and friends, potentially offend readers with my candor. In fact, I subscribe, as I wrote in The Outspoken Artist: Let Candor Be Your Brand, to Nina Simone’s iconic motto: “An artist’s duty, as far as I’m concerned, is to reflect the times.”

So I reflect… I just never thought to buy a yard sign.

Not sure why. Probably something to do with clutter-antipathy, not wanting my yard to look like an overwrought bumper sticker, and, besides, I figured I fulfilled my civic duty in other, less cluttery, ways: sending campaign postcards, performing at fundraisers (which I miss doing this year), writing op-eds, essays, and articles, doing relentless social media rabble rousing, speaking up, speaking out, etc.

This time? I don’t care if the yard looks cluttered, neighbors get put off, passersby wave red hats and middle fingers, or right-wing hooligans abscond with my purchase (I’ll just get another). This time I need to be LOUDER, in big bold words, all CAPS, on my front lawn, like a blazing little billboard.

Because this time is different. I’ve hit a tipping point I’ve never hit before. My standards of decency and integrity have been offended. My expectations of leadership — in all three branches of government — have been obliterated. My views and opinions of too many of my fellow citizens have been corroded. So I’m not feeling politic about politics. In fact:

1. I can’t bear one more second of a country where lies and the staggering dishonesty of a president and his henchpeople have not only become the norm, but are dismissed, ignored, emulated, even applauded.

2. I can’t tolerate one more second under the “rule” of a president so corrupt the sheer volume of his corruption has desensitized the nation and rendered that corruption irrelevant to those who support him; so corrupt his impeachment was met with a yawn by a party who apparently thinks he’s not corrupt enough; so corrupt the international community rejects and dismisses him as a laughable, inept charlatan.

3. I can’t endure one more second of cultural “think” that prioritizes the accumulation and protection of wealth over basic fairness and equity, essential business regulations, critical environmental laws, and the science of a deadly virus.

4. I refuse to accept one more second of enfranchisement and invitation to racists, right-wing vigilantes, Nazis, xenophobes, religious bigots, misogynists, and overzealous, gun-toting Trumpists, all of whom feel they represent the best of America. They do not. They represent the worst. That, apparently, needs to be said loudly at this moment.

All of which makes this election not just an election, but rather a referendum on who and what we are, what we aspire to be, what is possible given our best impulses as opposed to our worst. It is a moment beyond partisan or personality politics, beyond rich, poor, left, right, liberal, conservative, or progressive. It transcends one-issue voters, “lesser of two evil” arguments, the titillating urge to “shake things up” (thanks, Susan Sarandon!), the petulance of take-my-ball-and-go-home foot-stomping. It is a matter life and death, both virtual and literal.

Hyperbole? I don’t think so.

Certainly the 190,000 COVID dead (or whatever that number will be by the time you read this) wouldn’t have found it hyperbolic. Certainly the Black men and women who’ve died under the knee, with backs turned, or in their own homes wouldn’t either, nor would their grief-stricken families or those protesting those outrages who were gassed, kidnapped, and terrorized by right-wing armed vigilantes and federal mercenaries. The caged children, manhandled immigrants, assaulted women; the poor, the needy; those who’ve lost jobs, homes, businesses, and healthcare; environmentalists, international allies, and those looking to America to offer strong, powerful leadership of intelligence and integrity would not find it hyperbolic.

Because we do not have American leadership of strong, powerful intelligence and integrity. We have the opposite.

So I bought a yard sign. A small thing that not many people will see, but a symbol of taking a public stance, because it’s important to me to make crystal clear to anyone walking by that this election is about prioritizing humanity. Integrity. Honor. Survival. Lawfulness. Compassion. Truth. A balanced judiciary. A working Congress. Equity. Civil rights. All those essential elements that require we put aside petty differences, demands for faster progress, concerns for wealth protection, worries about changing culture, fear of other. It’s about realizing that though we may believe different gods, have grown up in different circumstances, faced different challenges, and embrace different cultures, we are all Americans who deserve intelligent, compassionate leaders of unassailable integrity. We all deserve to live and flourish without fear of never-ending chaos, relentless dishonesty, corruption, and ignorance. We all deserve a president our children can look up to, emulate, and admire.

We do not have that now. And if Donald Trump is re-elected, we won’t have that again for another four years, with many more after that to attempt recovery and reconciliation.

We cannot endure that potential. We cannot risk that potential. American democracy cannot survive that… nor can the many more lives who’ll be lost to his continuing authoritarianism, dismissal of science, rejection of climate change, willingness to subvert law, and embrace of dictators, charlatans, and “very fine people” waving swastikas and AR-15s.

I cannot stand by and quietly allow that America to be America, not for one more minute than I’ve been forced to during this corrosive administration. I fought like hell the last time and, tragically for us all (except, maybe, the rich folks), chicanery prevailed. That cannot happen this time. It can’t.

So I’ll do all my usual civic duty stuff; I’ll speak out, write articles, send postcards, share voter registration links, where to drop your ballot (check for LA county) and how to track it; I’ll help anyone who needs help, donate to blue candidates, etc.

And I’ll put my big Biden/Harris sign up in my yard. One that boldly declares that I stand for hope, change, integrity, diversity, and democracy. Please join me with your own… and send pictures. I’d like to see them.