Is it fear of death, of our inexorable mortal demise? A whistling past the graveyard of diminished youthful appeal? An irrational aversion to oldness akin to the indefensible mechanics of race hate? What is it, exactly, that makes the process and consequence of aging so terrifying to the bulk of society that they’d malign, dismiss, and denigrate a person just for the fact of being older?

I was forced to ponder this (again) after reading the onslaught of ugly, sexist, ageist pejoratives flung in response to the California Democrats’ refusal to endorse Sen. Dianne Feinstein this past week. While that happenstance deserves its own weighty conversation, the issue at hand is the undeniable playing of the “age card” as people spouted their glee at her rejection.

Regardless of any tangible, defensible arguments against her politics, her votes; her views on salient topics, the prevailing strain of trollery showered over this longtime public servant was the simple fact of her age: 84-years-old. 84-freakin’-years-old, dammit! How dare she.

Snarling denunciations of, “this tired, old hag,” came with shouts of, “TimesUP,” and insults to her longevity, her dyed hair, and her aging face. You’d have thought the woman ate small children instead of devoted her life in service to the welfare of Americans, including pushing her resistant colleagues to release the Fusion GPS transcripts, and, just this week, introducing legislation to “bring the rules for AR-15 sales in line with handguns,” an addendum to the Federal Assault Weapons Ban she wrote in 1994. Nothing irrelevant about any of that.

But, while she’s had an astonishing career that demands far better than the ignorance of internet trolls, I’m not here to argue the merits of Sen. Feinstein’s tenure. I’m here to use her recent trollery as a launchpad to discuss why we think, why we’ve accepted, and why we behave as if age is a worthy weapon to devalue, determine relevance, or disallow continuing contribution. Why it’s become an accepted form of discrimination. Why we choose to prioritize age over the wisdom of good ideas, the depth of experience, or the courage of actions taken.

In the political arena (let’s face it, all arenas), society too often gives in to its crass impulse to judge participants, particularly women, on the basis of the year they were born, or cruel assessments of their physical attributes… that ugly nexus of sexism and ageism. You don’t typically hear trolls bark about Bernie Sander’s grumpy face or advanced age (76), Donald Trump’s septuagenarian bloat and blunder (he’s 71), or Ronald Reagan’s descent into dementia before his second term ended at 77-years-old. Democrats applaud the prospect of Joe Biden (75) or John Kerry (74) throwing in for 2020, yet there was endless carping about Hillary Clinton’s advanced age (jeez, only 70!). Effective leaders around the world operate vibrantly and vigorously at ages far older than Ms. Feinstein—the Queen is 91, the Pope 90—and their constituents love them still.

But here in America, land of the free, home of the brave, bubbling cauldron of isms of every kind, the population likes its leaders, its celebrities, its artists, its influencers, particularly its women, young and pretty, evidenced by some of the comments during this recent Feinstein imbroglio:

• “She’s had her chance. Now it’s time for younger people to have theirs. Buh bye!”
• “People get stale when they’ve been somewhere too long. Get rid of them all.”
• “Their time is up and their season is over.”
• “No one cares what old people think. They’re done. Young minds are what’s happening.”
• “They need to get off the stage and let younger people take over.”
• “Old people are clueless. Too much change has happened for them to be relevant.”
• “People want hip. People want now. Old people are then and they’re definitely not hip.”
• “What’s with her picture? Bad dye job and she hasn’t looked that young in decades.”

And on and on. Sigh.

But here’s the strange and self-sabotaging fact that younger people maligning older people either ignore or refuse to consider: THEY will be old some day… and sooner than they think. And when they get there; when they look in the mirror and see a version of themselves they can’t possibly imagine at this moment, it will suddenly dawn on them that they don’t feel irrelevant; they don’t feel useless and used up; they, instead, feel as potent, effective, and purposeful as they do now.

And they will suddenly face that era’s sneering trolls echoing their own words of today. They’ll feel the sting of the same age discrimination they’re wielding so blithely at this moment. It will hurt and they will be inherently responsible for it all. 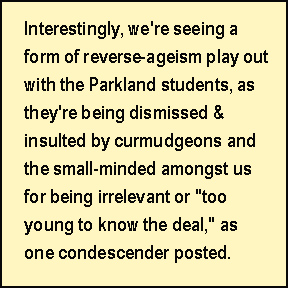 Because, as they currently dismiss older people as obsolete and expendable across systems, professions, social demographics, and cultural paradigms, they are setting up their own futures. They are building—brick by brick, word by word, tweet by tweet, insult by insult—a world in which they too will become obsolete. In which their accomplishments, experience, wisdom, and capabilities will be dismissed, devalued, and ignored. And what they will discover at that pivotal point, as Dianne Feinstein knows, as Jane Goodall knows, as the damn Queen knows, is that age has NOTHING to do with any of it.

A mind, heart, and soul still creating, exploring, learning, and contributing; a person willing to innovate, experiment, and share their knowledge. That happens—or doesn’t happen—at any age.

Making age, without a doubt, a most unworthy arbiter.

Here’s the point I’d like younger people to take away: If right now, today, while you’re young and on the cusp of your youthful bloom, you build a world in which every person, regardless of age, is judged, chosen, elected, or rewarded commensurate with their accomplishments and their contemporary willingness to evolve, you will have that world waiting for you when you are that older person. Think of it as an investment in your future.

And however you judge Dianne Feinstein, refuse to let age, gender, or the color of her hair be part of the equation. If anything’s irrelevant, it’s all that.

Age Is Not The Arbiter Of Relevance. See ‘Sneaky’ Dianne Feinstein

The Geeze and Me: Honoring and Illuminating Age Through the Wit and Wisdom of Musical Theater

Pass the Mantle? Thanks, But I’m Still Wearing Mine

3 thoughts on “Identity Politics: How Ageism Became An Accepted Form of Discrimination”