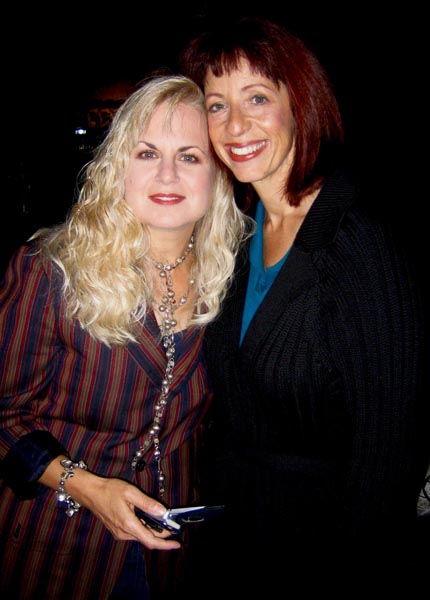 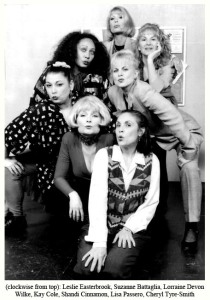 We met in 1997. I was in the show “Is It Just Me, Or Is It Hot In Here?,” a musical written by Barbara Schill and Dave MacKay, produced by Theater InSite (Michael Arabian, Suzanne Battaglia & Matt Goldsby), premiered at CBS Studios Center in Studio City, CA, continued at The Odyssey, and concluded a year and a half later at the Century City Playhouse (Hot Flash! A Menopause Revue – Los Angeles Times). This clever, touching, and extremely popular show pre-dated the commercially splashier but less significant copycat, “The Menopause Musical” (which oddly borrowed heavily from the parody concept of “Is It Just Me…”) and was designed as an environmental theater piece in which we actresses started in the audience to later join the “seminar” that was being conducted on stage. 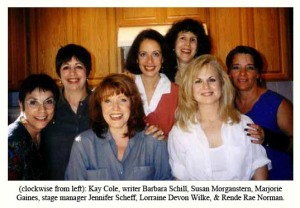 I was understudying the role originally played by the dynamic Cleo King; the role of Katherine, the successful but embittered businesswoman, terrified of growing older, who put that fear into the blues she sang. It was a great part that, after Cleo’s beautiful rendering, was wonderfully recast with Debra Byrd (who later went on to fame and fortune as the vocal coach, Byrd, on “American Idol”). I then became Debra’s understudy and when she left for a Broadway run of “Bring in ‘da Noise, Bring in ‘da Funk” that summer of ’97, I finally took over the role for the duration. At some point that same summer, Susan joined the show as another understudy, graduating to a full cast member not long after I did. Together with the other women in these photos — Leslie Easterbrook (of Police Academy fame), Suzanne Battaglia, Kay Cole (noted stage actress and director), Shandi Cinnamon, Lisa Passero (in the role Susan took over), Cheryl Tyre-Smith, and several other talented women (some not pictured) — Rende Rae Norman, Lauri Johnson, Marjorie Gaines; Aloma Wright (who became my understudy and went on to famously play Nurse Laverne Roberts on “Scrubs”) — Susan and I enjoyed the camaraderie of working on a long run of a good show, taking those slow, easy steps towards becoming good friends. 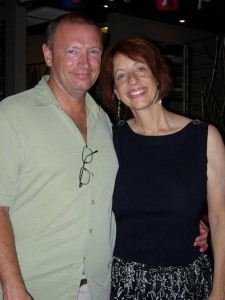 When the show ended, Susan continued her work at the venerable Theater West, both acting and directing. I caught many of those shows and was always impressed by her talent and pure enthusiasm for theater as an art form. Off-stage, she equally impressed with her burgeoning identity as “sportswoman,” often in the company of her indefatigable husband, restaurant producer Jerry Prendergast, who wooed her into joining him on the long-distance bicycling trips that ultimately led to her amazing transformation in terms of fitness and endurance — not many theater people I know can do their first triathlon in their mid-40’s (shaming me as I vigorously pumped away on my hardy elliptical!). We spent time at each other’s houses, with each other’s families, sharing our lives, trading dinners, fitting in long walks when we could, always keeping each other boosted during the inevitable twists and turns of our respective careers. 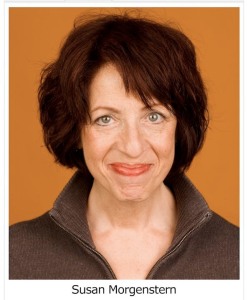 Here’s the official theater-program bio: Susan Morgenstern began directing by staging musical theatre concert productions while co-teaching “American Musical Comedy” with Tom Lehrer at UC Santa Cruz.  She went on to teach and direct in New York, where she also co-wrote, co-produced, co-directed, and performed in the zany comedy group, The Sylvanian Shakespearean Sircus.  Susan has directed various works at Theatre West, including Saturday Night at Grossinger’s, which played for several months to sold out houses.  To open the Falcon Theatre’s 2007-2008 season, she directed Leap, and then returned the following season to direct Surviving Sex. Susan returned for a third season in a row to direct The Psychic. She also directed a Theatre West mainstage production of The Socialization of Ruthie Shapiro in June 2010, and is currently at the helm of the smash musical, “Happy Days: A New Musical,” opening Friday, October 22nd, at the Cabrillo Music Theater in Thousand Oaks, CA. Based on the classic television series, it features an entirely new book by the show’s creator, Garry Marshall, and a brand new score by Oscar-winner Paul Williams. Featuring all of the popular characters from the series, Cabrillo’s production of “HAPPY DAYS: A NEW MUSICAL” is one of the first regional productions following a successful national tour. Working with Susan is choreographer John Charron, musical director Lloyd Cooper (leading the Cabrillo Music Theater Orchestra), with production supervision by Associate Producer Barry Pearl and Artistic Director Lewis Wilkenfeld.

And here’s what I want to say about Susan: she’s one of those people who comes to your gigs even when they’re at shitty little clubs in Van Nuys. She remembers what you told her a month ago, returns your phone calls even when she’s busy, and responds to emails in a most timely fashion (one of my most favorite things!). She’s profoundly generous, ready to help a friend whenever called; someone who’s been in the trenches but never fails to love what she does. On top of all that, she’s a brilliant actress with equal measures of wit and depth, both of which infuse her work with an instinctive sense of pacing, rhythm and repartee.  Yeah…I’m a fan. 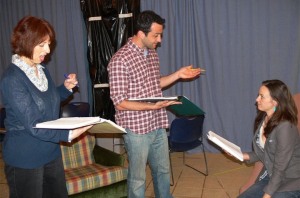 Frankly, I should have posted this weeks ago…the show opens tomorrow night (Friday, Oct. 22nd) and runs only this weekend and next. So if you’re in the area, GET OUT THERE!! This is a big, huge, fun show; the music is infectious, the story nostalgic, and it seems fitting to present it at this particular moment in time…in honor  of Tom Bosley, the original Mr. Cunningham, who passed away earlier this week.

But mostly, go enjoy the work of my cohort, my fellow artist, my dear friend who would surely want you to just sit, be comfortable, and enjoy! And if you can’t make it, keep an eye out for this chick…these days are hers!

22 thoughts on “These “Happy Days” with Miz Susan Morgenstern”