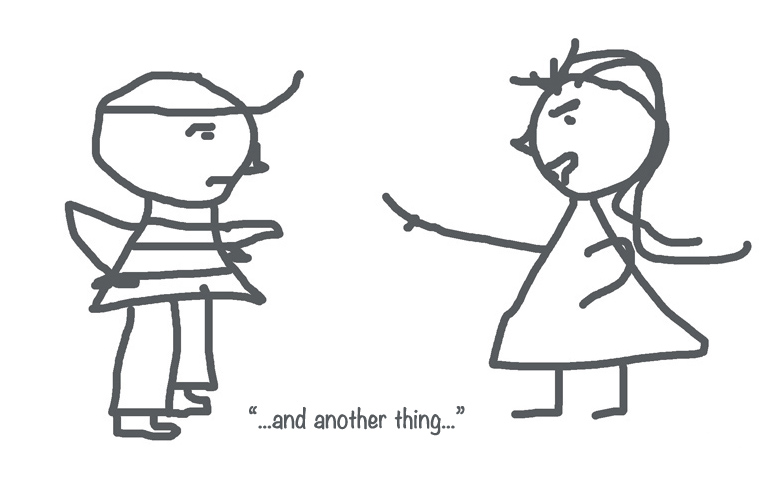 I wonder how many times a day I read an article, note a passing Tweet, hear some frothing nonsense on the news, and mutter to myself, head shaking and eyes rolling, “Oh, dear God, are you kidding me?!” 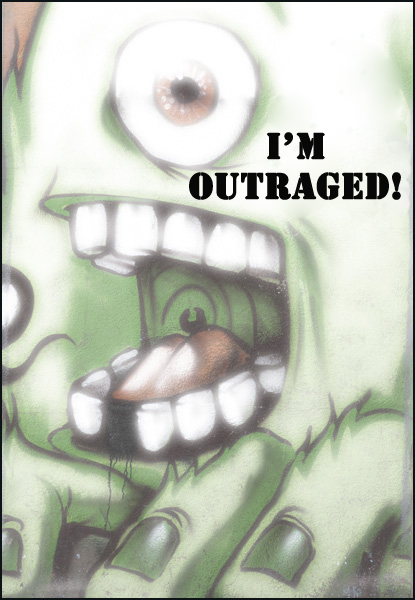 In fact, the sheer density and degree of nonsense worth swearing about is shock-and-awe inspiring, and if I didn’t hold tight to my policy of “limited news intake,” I swear I’d be swearing like it was the very air I breathe.

These things seem to be worth raging over. As do Trump’s relentless acts of idiocy and demagoguery; a Republican party whose ambitions trump true patriotism and rule of law; a cabinet enriching itself on taxpayer dollars; a partisan agenda wrapped in cruelty, xenophobia, greed, and discrimination across countless demographics. Go crazy on those, yes; there’s plenty to go around and surely (sadly) more where all that came from.

But what I find disingenuous and head scratching during these days of “all outrage all the time” is the selectiveness of what piques the ire of some. What gets them off the couch and over to their computers to defend egregious prevaricators, tweet indignant denunciations of this or that; demand apologies from those skewering politics, or announce ad hominem attacks to come.

Yes, all that happened this weekend. And you might think the brouhaha inspiring such response was Trump’s insane Michigan speech in which he actually said, “If we don’t get border security, we’re going to have no choice, we’ll close down the country.”

Or the news that “ICE held an American man in custody for 1,273 days.”

Or the stunning fact that “Neo-Nazis Burned a Swastika After Their Rally in Georgia” a few days ago.

Nah. All the hissing fit to print—on Twitter and elsewhere—was over a very funny comedian, Michelle Wolf, who, hired to do the traditional roast at the end of the White House Correspondents’ Dinner, fearlessly took on everyone from Trump, to Democrats, to Pence, to Kellyanne Conway, and, most spectacularly, Sarah Huckabee Sanders, the snarling curmudgeon who sprinkles lies like parade candy from her Press Secretary podium on a daily basis. Wolf’s routine set the media, social and otherwise, on fire. Did you hear anything about that ICE case or the Michigan speech? I didn’t either. There was too much noise coming from those who, instead, selected Wolf’s irreverence as the target of their indignation.

Surely, as satire is meant to do, Wolf’s routine was cringe-worthy at times, occasionally caustic, on-the-mark, over-the-line, very funny, and bracingly unvarnished. The transcript and video are everywhere; dive in when you can, but suffice it to say, she called out the chicanery and corruption of the White House and its two cheerleading ladies-in-waiting in ways that those of us who literally scream at the TV every time either opens her mouth have been waiting for someone to do for a very long time. 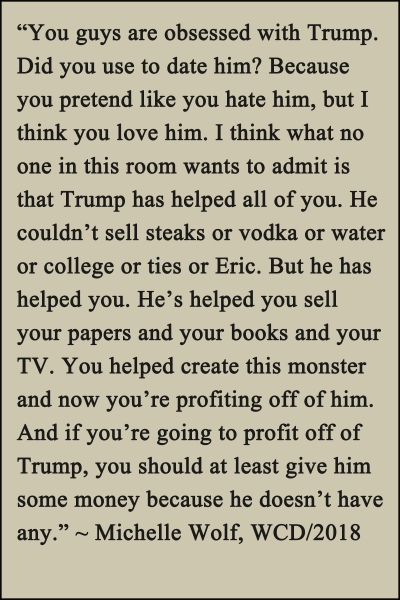 In a nutshell: she called the liars… liars. And what did the outrage machine do in response? Check the links above: lots of foot stomping, spittle-flying, head-shaking, “well, I never!” kind of “aren’t we above this sort of thing?” foolishness meant to illustrate how noble and hands-off they think a comic hired to do a roast should be when taking on the most corrupt, dishonest, likely treasonous; rude, bigoted, and unfathomably stupid administration… and the media that chronicles it.

Defending Sarah Sanders from a joke that was not only hilarious but bitingly spot-on became the ’cause celebre’ of everyone from Andrea Mitchell to Mika Brzezinski, to, of course, every sputtering journalist on the right, and even some on the left. Apparently they saw this as a red-line dig on her looks. Really?? Did they miss the subtext? Here’s  the joke; you decide.

“I think she’s very resourceful. But she burns facts and then she uses that ash to create a perfect smokey eye. Like maybe she’s born with it, maybe it’s lies. It’s probably lies.”

It seems to do exactly what satire is meant to do. It’s also funny.

Look, everyone is free to be as outraged as they want by whatever piques their pricklies, but when an entire weekend’s discourse is dominated by the sound and fury of journalists, pundits, and opinion makers who found the candid and irreverently honest routine of a smart female comedian to be worth more wrath than the ICE story or Trump’s mentally unhinged declaration to shut down the country, selective outrage has become its own form of madness.

Considering the cynical, sexist, bigoted, and mendacious remarks often made about Hillary Clinton, Michelle Obama, or any other women on the left (even the men on the left… thanks, Obama!), a little snark about an incessantly dishonest woman using the ash of her lies for eye makeup seems tame. And, again, funny.

But do let me know when the madding crowd starts demanding, en masse, the apologies of profiling police departments and overzealous ICE agents. Give a holler when justice for the assault victims of the man in the White House becomes a viral trend. Tweet out when journalists start refusing to eat up the Press Secretary’s spoon-fed dishonesty, or when provocateurs like Dennis Miller spend days thinking of ways to attack Nazis burning swastikas, or men drugging and raping women.

When that happens, we’ll all gather in the virtual town square to celebrate the power of our communal outrage… and Michelle Wolf will keep telling the truths that make people laugh.

8 thoughts on “Selective Outrage Is All the Rage. Just See ‘Michelle Wolf’”